Actions have been with CRM since 2013 but, until now, they have been for developers. With Dynamics 365 this is no longer the case.

What is an Action?

Not being much of a developer, I have not had a lot to do with Actions to date. In essence, they are Workflow-like processes which can be called from code.

So, if you are a developer looking to emulate a series of steps which can be easily defined with a Workflow, the Action is a good idea. Similarly, if there are steps which the client wishes to maintain without getting involved with code, Actions provide an easy way to expose this. 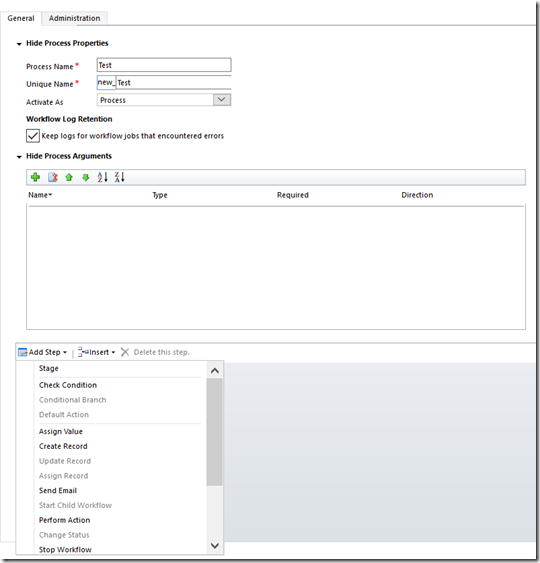 To be honest, to date, I have not seen Actions used a lot in my projects. As mentioned, I do not use them and often developers prefer to keep things in the one place for maintainability (when they are the ones maintaining it), rather than using three or four different tools to solve a problem. Hopefully, thanks to the improvements in Dynamics 365, Actions will become more popular.

In Dynamics 365 (and in CRM Online with the December update) you can call Actions with the Perform Action step.

Unlike Workflows (and like Dialogs) values can be passed into Actions from where they are called. In a way they are like programmatic functions for Workflows.

Imagine you want a workflow to act on an Opportunity but for it to do different things depending on the stage it is up to. You could fill your Workflow up with a bunch of If statements, making it hard to read, or you could pass them off to an Action, passing through the stage as a parameter, making the Workflow much easier to read.

Similarly, if there are stages in a process where approvals need to be made, the Action could hold the approval process while the Workflow provides the context. While I have not explored this myself, it is possible that security could restrict access to one part of the process while leaving the other part open.

I can see a lot of value in bringing some of the flexibility of Dialogs to Workflows as well as making Workflows more manageable and scalable. If you find yourself creating complex Workflows with repetition, consider Actions as a way to simply them.

One thought on “Actions: The New Workflow Function”